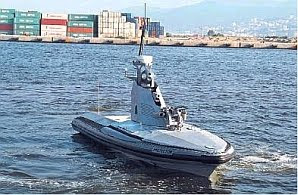 Once again, superior and cutting-edge Israeli military technology surpasses and outshines anything else available anywhere in the world, other major powers of the world not even in the same league.

"In the most recent unveiling the Israel Navy has now deployed a speedboat drone capable of reaching enemy targets hundreds of miles from Israel shores."

"The unmanned speedboat is equipped with a remote-controlled machine gun capable of being operated with laser accuracy up to a range of 50 kilometers, reportedly the first of its kind in the world."

A gun-stabilized system that ensures accuracy even in the heaviest seas. A machine gun, so-called, with extraordinary range and accuracy. The "Death Shark" is badassed, as they say!

The "Death Shark" has already been operating surreptitiously for some time, and in considerable numbers too. That is a big advantage to such a naval vessel. You can make and deploy whole bunches of these craft and do so very cheaply. Operate from a long distance with a minimum of "crew" [two men to operate remotely]!

The analysts suspect that the "Death Shark" has been around for at least a year, with hundreds deployed throughout the waters of the Middle East and Mediterranean.

Also, this "Death Shark" can be piggy-backed on a conventional ship, or large numbers of them can be piggy-backed, to any point on the globe and operated remotely, without a whole lot of trouble. A global-reach potential that the Israeli has been striving for.

And I bet that the Israeli has AN ENCRYPTED VIDEO DATA LINK FOR THE "DEATH SHARK"!!