More on the danger from the alleged terrorist duo, Gilani and Rana. Gilani, alleged to have done a recce [reconnaissance] on an INDIAN plutonium and atomic bomb-making plant! [alleged, always alleged!]

This terrible thought has occurred to me. Illinois - - the most nuclear state in the USA - - also was in danger from Rana and Gilani?

That sheep and goat ranch, Kinsman IL. USA, owned by Rana, the alleged terrorist accomplice and plotter, was within striking distance of a number of American nuclear facilities. A fairly elaborate ranch, with adjacent slaughterhouse, potentially a safe-refuge and hiding place for a gang of terrorists, bent on wholesale slaughter and destruction. Slaughter and destruction through the use of the radiological weapon, nuclear debris lofted into the atmosphere, carried by the prevailing winds to a target!

Clustered close to Kinsman are at least three major nuclear facilities that were likely and potential targets for an attack by Al Qaeda operatives. Aided and abetted by Rana and Gilani!

Atomic facilities to include: 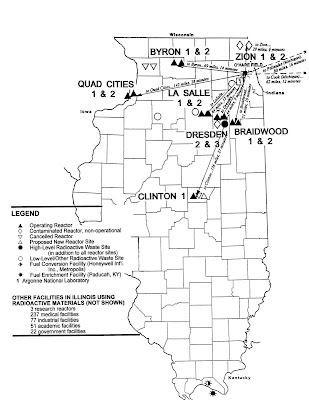 Kinsman is located more or less in the center of that cluster - - La Salle/Dresden/Braidwood!
Each and everyone of these power plants and storage facilities are within less than an hours drive from Kinsman.

About sixty miles to the northeast is the metropolitan area of Chicago. Seven million persons, highly urbanized.

A radioactive release from anyone of these three complexes [Braidwood, La Salle, Dresden], would pose an extreme danger to the Chicago area. Especially in the summertime, the prevailing winds during that season blowing from the southwest to northeast!

Someone in the counter-terrorism community has taken note of the Kinsman ranch and the proximity of same to these nuclear facilities? I would hope so.

Someone - - the FBI, Homeland Security - - SOMEONE - - has totally dismantled that slaughterhouse and dug up thoroughly that property in Kinsman? Looking for concealed weaponry, explosives, etc. I hope so!