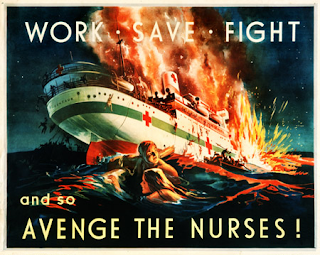 Here we have the case of the AHS Centaur. Attacked and sunk during the Second World War [WW2], apparently a case of "battlefield" [at sea] atrocity. Japanese submariners attacking in a wanton and callous fashion, in total violation of all conventions and protocols addressing the question of hospital ships operating in war time.

"Australian Hospital Ship (AHS) Centaur(I) was a hospital ship which was attacked and sunk by a Japanese submarine off the coast of Queensland, Australia, on 14 May 1943. Of the 332 medical personnel and civilian crew aboard, 268 were killed."

The sinking of the Centaur was at the time [1943], a cause celebre' in Australia, and remains so to this day!! ONLY JUST A FEW DAYS AGO WAS THE WRECKAGE OF THE CENTAUR LOCATED, THE AUSTRALIAN GOVERNMENT PROMPTLY PLACING A NEWS BLACKOUT REGARDING ALL DISCOVERIES MADE DURING EXPLORATION OF THE SUNKEN SHIP!!

"while on her second voyage, Centaur was torpedoed and sunk by a Japanese submarine . . . The attack resulted in public outrage as it was considered to be a war crime."

"The reason for the attack is unknown, and the events surrounding the sinking of Centaur are controversial because it has been attested that she may have been in breach of the international conventions that should have protected her"

" [At the time of the sinking] Centaur was painted with the markings of a hospital ship as detailed in Article 5 of the 10th section of the Hague Convention of 1907":

* "white hull with a green band"

* "three red crosses on each flank of the hull"

* "identification number 47 on her bows."

* "markings were illuminated by a combination of internal and external lights" 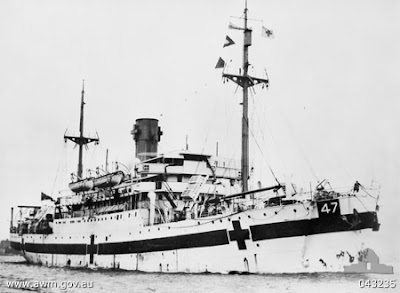 Here is a photo of the Centaur properly painted and displaying identification markers as required by the Geneva Conventions.

"Also, Centaur was sailing completely illuminated" [the attack occurred during hours of darkness.]

Even from the time of the sinking, there was rumor and controversy surrounding the charges that the Centaur was in violation of the Geneva Conventions regarding hospital ships. Charges found to wanting - - even at the time of the attack!

"During the loading process there was an incident when . . . ambulance drivers . . . attempted to bring their rifles and personal supplies of ammunition aboard . . .the rifles were not allowed on board until Centaur’s Master received official reassurance that the ambulance drivers were allowed to carry weapons under the Hague Convention (specifically Article 8), as they were used 'for the maintenance of order and the defence of the wounded.'"

The ship's master had specific concerns about the ambulance drivers being armed. Such concerns were allayed and the Centaur proceeded as scheduled, "official reassurance" BEING CORRECT! The presence of armed ambulance was NOT in violation of the Geneva Conventions, the weapons [small arms] being unloaded and the ambulance drives being both required and permitted to have such weapons aboard ship!

"the search team announced on 20 December that they had found Centaur . . . The Centaur wrecksite has been marked as a wargrave and protected with a navigational exclusion zone. Inspection and filming of the wreck with the ROV is slated to occur in early January."

Also, again, as in all cases, state-of-mind of the Japanese submarine commander has to be a factor here as to whether or not this constituted a war crime. Did the sub skipper have some advance notice that the ship MAY have been in violation of the Geneva protocols? I think NOT!

This is a modern day saga that is not going to go away. I have a source that is up-to-date on this matter! More info to follow when available. Over sixty years after the foundering of the Centaur, revelations are forthcoming.

You appear to have jumped to the conclusion that the sinking of HMAHS Centaur was a war crime. It is well known in Australia (but conveniently 'forgotten') that there were rumours (more than rumours really) that arms and ammunition were indeed loaded on board this ship at the dockside. Apparently it was at a time of a dockers strike and although the ship's Captain protested he was 'persuaded' to sail with the arms on board. It is thought that during the dockers strike there was a Japanese spy in the dock who witnessed the arms being loaded and signalled to the Japanese submarine the information just as or after the ship sailed.

Certainly the 'rumours' were surpressed following the sinking and the Australian Govt. made the usual protests etc.

Members of the nursing staff of the hospital ship Oranje (a Dutch vessel with Australian and New Zealand personnel aboard) were aware of the arms story and subsequently voiced their fears on the subject in the press.

All this does in no way reduce the pain and suffering felt by the relatives and friends of those lost on the Centaur and annual commemorations are staged each year to this date.

It is widely thought that this was not, therefore, a war crime although we will not know for certain until and unless the wreck is searched and arms found. That circumstance is very unlikely to happen.