There are too, from the wiki entry on the Tallboy/Grand Slam bombs, some footnotes that got my attention immediately:

1. "After the war, bomb penetration tests with Tallboy and Grand Slam were conducted. Tallboys and Grand Slams were also carried experimentally by American B-29's (Operation Ruby)"

The target for this "test" [Ruby] was the Valentin submarine "pen", Bremen, Germany.

Bombs, the penetrator type of the Tallboy and Grand Slam variety, dropped IN THE AFTERMATH OF THE WAR, HOSTILITIES BEING OVER - - MERELY TO GIVE A REAL WORLD TEST TO THE "USEFULNESS" OF SUCH A WEAPON!

The particular target chosed for the Ruby "exercise" was the Valentin submarine pens! 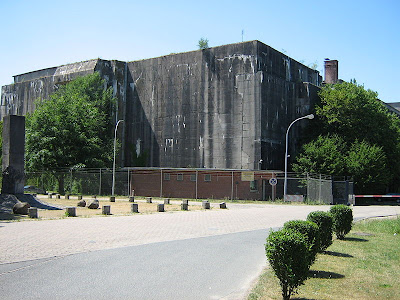 Here is a photo of the Valentin structure as of 2006.

NOT just submarine "pens" as the term is generally and ordinarily understood. A facility more a factory, specifically designated for the construction of the Type XXI U-Boat!

"Bombing by the RAF and the USAAF dramatically reduced production of U-boats by the German shipyards, so a bomb proof shelter was built under the codename Valentin at Farge in Bremen."

"It was planned that they would be used for assembly of the submarines of the type XXI."

Even to the end of the war, Doenitz and Hitler held out hopes, foolishly so, that the Type XXI, if brought into the fray quick enough and in sufficient numbers, could still win the Battle of the Atlantic for the German and bring the allies to the bargaining table!!

"The pens were attacked by No. 617 Squadron of the Royal Air Force on 27 March 1945 . . . Two Grand Slam bombs penetrated a section with a 4.5 m roof thick roof rendering the pens unusable"

Valentin had been attacked, most successfully too, by the RAF prior to the end of the war - - and then attacked once more - - IN THE AFTERMATH OF THE WAR!!

That Valentin structure still seems to be more or less intact and in one piece? Still being used in some capacity? It may be that Valentin resembles in a way the German flak towers of World War Two [WW2]? Built in such a sturdy manner that it is economically unfeasible to tear down? A white elephant if there ever was one?

See here excellent film footage from the era of a Grand Slam in action. "Bombing up", as the RAF referred to the loading of the Grand Slam on a Lancaster bomber, was just a feat in itself. And those RAF ground crews are always so spiffy in their uniforms with ties!

2. "Why these raids were carried out when the site was in Allied hands and no longer a threat is something of a mystery, unless it was to test the bomb's effectiveness against a reinforced concrete target"

In this particular case, the allies bombed German "rocket sites" in France, after capture! This was during the Battle of France [1944], the allied armies having moved far to the east! Bombing targets, hardened "rocket" sites, the purpose was to "test" the Tallboy/Grand Slam in a "captive" environment? Whether these sites were for the V-1 or V-2 is not clear?