"Better is the enemy of good enough." - - Russian proverb.

In the case of the Soviet Alfa class submarine "good enough" was NOT good enough!

Thanks to the author Gerhardt Thamm and the American CIA [Central Intelligence Agency], here is an article that: "originally appeared in a classified Studies in Intelligence" and "was declassified with slight redactions in 2007."

Declassified with ONLY slight redactions! Cool. NOW available on the Internet. As usual, the comment can be made that what was once only for the purview of the most elite and highest echelons of the government is now available for perusal by the average citizen, such as ourselves! [are we the devoted readers to this blog average?] 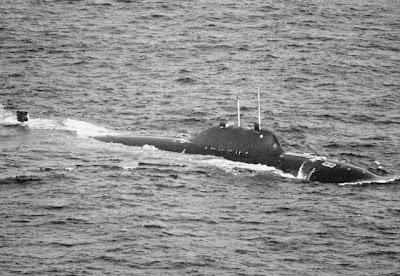 * Alfa destroyed the existing paradigm regarding Soviet submarine engineering development. Alfa WAS not an incremental improvement, was a MAGNUM LEAP TYPE OF IMPROVEMENT!!

The paradigm being that the Soviets could not possibly build a titanium hulled sub that could dive much deeper and run much faster than even the fastest American torpedo!

* "Our [U.S.] submarines not only looked better, they were better."

If it looks good, it probably is good. This is TRUE! I one time asked a mechanical engineer about this and he said: "it is so!!" And intuitive almost instinctual appreciation of what will work and what will work well can be had, and almost at a single glance? If it looks boss it probably IS BOSS!!

* The analysts noticed something they had never seen be-fore, a 'highly reflective' pressure hull section near the ALFA assembly area."

Steel is not "highly-reflective", BUT TITANIUM IS!!?? All this gleaned from space satellite photography?

* "For nine years, he [Lord, the CIA analyst] would be in the center of the battle over the 'titanium submarine.' During the early 1960s, little reliable, high-level scientific and technical information was available, and Lord had to rely heavily on photographic intelligence."

Right, the Soviets are very good at counter-intelligence and very good at concealing what they do not want the opposition to know about. Lord the CIA analyst had to INFER from photographic-intelligence from satellites the various unique features of the Alfa AND THEN CONVINCE THE "EXPERTS" THAT WHAT HE WAS SEEING WAS NOT HIS IMAGINATION. And do so for a period of nine years!!

* Furthermore, even when it was conceded that the Soviets now possessed a vessel of formidable capabilities, an understanding of the doctrine, the tactics, the operational art for which the Alfa was intended was sorely if not totally lacking? The CIA needed to get an agent either in the construction shed for the Alfa or hire a staff officer from the Soviet Navy who was conversant with the Alfa development. From the standpoint of the CIA - - an impossibility??!!

I have even read that near the White Sea manufacturing facility where Soviet/Russian submarines are built, enormous pylons have been place in shallow water with camouflage netting stretched between them. Allows for a Russian sub to be built, take to the water, submerge, and never have to surface and be surveilled by American satellites. I wonder if that stuff can be seen by Google Earth?