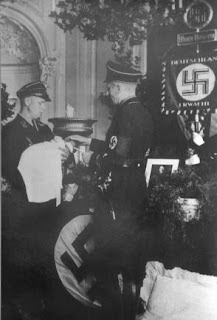 
"'To believe these children will become decent citizens is to believe rats in the cellar will become house pets.'"
"The chosen ones: The war children born to Nazi fathers in a sinister eugenics scheme speak out"

"They were the blue-eyed blonds born into a sinister SS scheme to further the Aryan race. But the defeat of the Nazis left Norway's 'Lebensborn' facing the vengeance of an entire nation. Here, five former war children talk for the first time about their ordeal – and their fight for compensation"

The subject of Lebensborn - - Norway, is a hot button item? Thanks to THE INDEPENDENT, a discussion of the issue.

Norwegian girls, without any coaxing, no compulsion, begetting themselves, fostering children with German soldiers, the conqueror and occupier. Norwegian girls, collaborating, consorting, eager to please the enemy.

Part of the SS plan to create a race of blond-blue-eyed-superman. Nordic perfection that was so lacking in so many of the Nazi elite.

The offspring of these romantic liaisons are reviled, considered to be outcasts, pariahs, unter-mensch - - for over sixty years now!!

NO mention is made of:

See my previous blog entry on this topic.

Those persons born of lebensborn are to be pitied rather than hated? I think so!