Looking over some web sites on weaponry of the Korean War:

"The 75mm reckless gave infantry much the same power as if a couple of men were carrying around a German 88. It could take out a T34 at 400 yards" 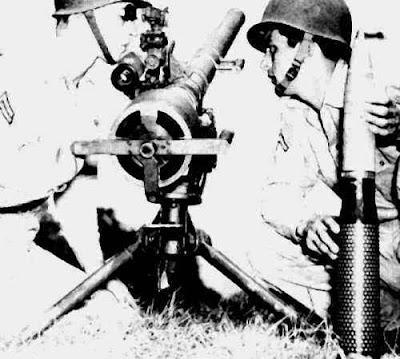 The M20 recoilless rifle, as wielded by U.S. infantry men in Korea, was equal in striking power to the German 88 mm anti-aircraft artillery [AAA] piece? The 88 mm, when used specifically in the anti-tank role, was one of the most significant and effective weapons of the Second World War [WW2] [?]! Only a few years after the end of WW2, the much smaller and AT THE TIME - - REVOLUTIONARY M20 obviated the need for anti-tank artillery?

That HEAT round as fired by the M20 was effective in stopping a Soviet T-34 tank? Prior to that, the U.S. forces in Korea deployed weaponry that was INEFFECTIVE WHEN USED AGAINST THE T-34. Whether is was the standard issue bazooka of the time, the main gun of the Chafee tank, or a round fired from the 105 mm howitzer in a direct fire role, the T-34 proved surprisingly to be impervious to U.S. anti-tank weapons.

With the advent of the M20 - - in capable hands - - the T-34 no longer posed the terrible threat that it did at the start of the war?

Those two men operating the M20, also had to be very susceptible to counter-fire. YOU HAD TO MAKE A KILL SHOT WITH THE FIRST ROUND YOU FIRED OR YOU WERE "TOAST"?