"He mastered intricate problems in fifteen minutes which took the average cadet an hour and half of the other cadets there were college grads." - - Fellow Red Sox player Johnny Pesky

A comment in response to my previous blog entry about famous celebrities that served as aviators during World War Two:

Famous persons, world-class celebrities, that when duty called, responded in an admirable manner. NOT shirking their duty, volunteering for hazardous duty, combat fliers! In the case of Ted, even more so.

Ted Williams. Perhaps the greatest hitter the game of baseball has ever seen. Hit for high average with power. An outstanding player.

Ted Williams in particular was a natural at everything he seemed to do? Just had amazing skills, and NOT ONLY on the baseball field. A man - - an absolute perfectionist at everything he did - - with great physical and mental skills - - extremely highly motivated - - accomplishing what the rest of use mostly just dream about. 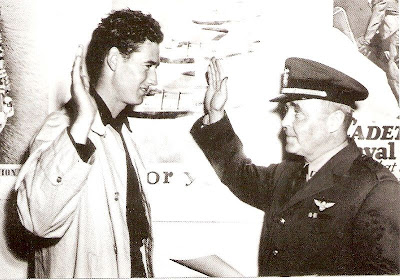 Had an exemplary military career, as a Marine aviator of MARKED ability and acumen:

"he [Ted] joined the V-5 program to become a Naval aviator [World War Two]. Williams was first sent to the Navy's Preliminary Ground School at Amherst College for six months of academic instruction in various subjects including math and navigation, where he achieved a 3.85 grade point average."

“'I heard Ted literally tore the `sleeve target' to shreds with his angle dives. He'd shoot from wingovers, zooms, and barrel rolls, and after a few passes the sleeve was ribbons . . . I know he broke the all-time record for hits.' . . . broke all the records in reflexes, coordination, and visual-reaction time. . . . 'From what they said, his reflexes, coordination, and visual reaction made him a built-in part of the machine'" - - Johnny Pesky.

Ted serving NOT ONLY in WW2 but during the Korean conflict as well, again, as a combat pilot:

"at the age of 34 [1952], he was recalled to active duty for service in the Korean War. He hadn't flown for some eight years but turned away all offers to sit out the war in comfort"

"After eight weeks of refresher flight training and qualification in the F9F Panther jet. . . he was assigned . . . [and] based at K-3 airfield in Pohang, Korea . . . [and] Williams eventually flew 39 combat missions"

* Williams did have the most extraordinary reflexes AND VISUAL ACUITY. Attributes necessary to success as a baseball hitter also serve well when it comes to flying a combat aircraft!!

* Williams was also a highly motivated individual. Had himself as competition, if there was no one else. Could not stand losing or being in second place in any regard. Always wanted to be the best and pushed himself to be so. AND OBVIOUSLY TOO HAD A FORMIDABLE INTELLECT, NOT NECESSARILY SCHOOL LEARNING - - BUT POSSESSING INNATE "SMARTS"!!

* It is generally conceded to that Williams lost the BEST FIVE YEARS OF HIS BASEBALL CAREER TO MILITARY SERVICE!!

He could see the stitches on a baseball as it came at him.