"if the Germans would have gotten more of the the XXI in service it would have MASSIVELY changed the war,imagine a U-boat that was faster underwater than on the surface! The XXI could launch 6 torpedoes and reload all 6 in the same time it takes the crew to load 1 on a type VII/C."

This is of course, the German Type XXI submarine. The Electro-boat. 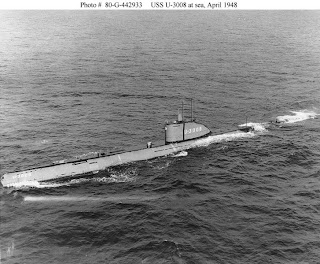 Innovative and advanced submarine design that could have been a war-winning measure for the German, if manufactured in numbers and sent to sea in time. The Battle of the Atlantic could have gone AGAINST the allied forces, if this particular class of submarine had been available at the time.

"Type XXI U-boats, also known as "Elektroboote", were the first submarines designed to operate entirely submerged . . . They were revolutionary when introduced and, if produced earlier and in sufficient quantity, could have seriously influenced the outcome of the Battle of the Atlantic."

Revolutionary submersible boats that could, with "der schnorkel", operate more or less submerged during an entire voyage!

AND DID NOT HAVE TO GO TO PERISCOPE DEPTH AND VISUALLY OBTAIN A "SOLUTION" FOR FIRING ON TARGETS!! USED AN ADVANCED SONAR AND HYDROPHONE [??] SYSTEM FOR DETERMINING TARGET "SOLUTION"!!

Indeed, is is reputed that Admiral Rickover took one look at the German Type XXI and said "good to go" when the decision was made to build the Nautilus. The hull and design of the Nautilus compare very closely to the XXI??

Innovative design also in that the Type XXI was built from prefabricated sections, "final assembly taking place at the shipyards"! Sections of each boat built at a different location, each section shipped by barge to a shipyard where final assembly was accomplished.

This "modular assembly" was copied from the German automobile industry, and used at the behest of Albert Speer. By that period of the war, Speer was undoubtedly very worried about the allied strategic bomber offensive, and concerned, rightly so, that one massive strike could cripple submarine manufacture indefinitely. Modular construction makes sense when taking into account a massed strike by allied aircraft??

"Albert Speer's insistence that the sections be made by inland companies, even though these had little experience in naval construction"