It comes as a surprise to many - - that the air forces of a variety of nations have units possessing an organic GROUND combat capability?

Airmen, normally performing sentry, guard, surveillance duty, and, if necessary, carrying out missions normally relegated to and associated with INFANTRY!

Airmen trained in a variety of small-arms, heavy arms in some cases, guarding and securing airbases in time of peace and war.

A mission NOT ONLY from the perimeter fence of an airbase INWARD, but also OUTWARD as the circumstances warrant! Guarding an airbase against saboteurs, enemy surveillance and reconnaissance, AND ATTACK DURING WARTIME BY HIGHLY TRAINED ENEMY UNITS OF THE "HUNTER CLASS"!
[troops of the "hunter class" is a term used by Winston Churchill when describing commando units!!]

"They are also the first and only ground based line of defense for the USAF . . . They are trained in ground combat skills . . . [and] also provide the law enforcement function on all Air Force bases"

Right! Guards, sentries, and military police as well! A variety of functions!

(French for "Fusilier Commandos of the Air") 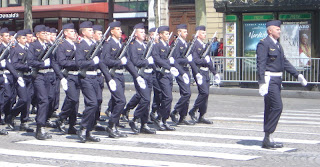 "These personnel of France's Armée de l'Air . . . are airmen armed and trained as infantry, who provide ground defense of air bases and secure forward base areas; they also participate in combat search and rescue missions"

Troops some of which have a parachute capability. To be used when deployed in AN OFFENSIVE MANNER, SECURING CAPTURED AIRBASES OR PARTICIPATING "in combat search and rescue missions"!!

"The purpose of the regiment is ground based defence of air force bases and installations, as well as capturing and securing enemy air installations."

Again, as with the French, the German Air Force Regiment has a capability for OFFENSIVE ACTION, in furtherance of "capturing and securing enemy air installations"!

"The Airfield Defence Guard (ADG) mustering of the Royal Australian Air Force (RAAF) performs specialist ground defence tasks to protect air power assets from hostile ground action."
Particularly with the American, British, French, and to a degree [when part of NATO mission] the German; the main task of these air force ground combat units is to guard and secure nuclear weapons assets against sabotage and attack. NOT only during a time of open warfare, but potentially also in those months and weeks prior to the commencement of overt combat!! This would include the actual warheads in depots, the delivery systems [i.e., B-52 bomber], the aircrews, the command and control structure, and the communications network used to send "go" commands!

[Suvorov speaks of the "gray", and "pink", terror as graduated phases of "combat" carried out by Soviet/Russian special purpose units PRIOR to the initiation of hostilities. Such "combat" in large measure would be directed at all and any nuclear weapons assets!]

Securing, protecting, guarding nuclear deterrent and retaliatory assets is a mission not to be trifled with! These air force ground combat units have a dull and boring job in peacetime, but in wartime or during a period of crisis, a role of the utmost importance, with a potential lethality second to none?

I only recently stumbled on this site and found it very interesting and informative. At my age (68) my military service is long since behind me but I am a great supporter of the military and one of my best friends has a son in the USAF

"[troops of the "hunter class" is a term used by Winston Churchill when describing commando units!!]"

They were not entirely 'commando' units, so maybe there's also another possible explanation for "hunter class"?

Today's dismounted infantry units of the Bundeswehr are btw "Jäger" = hunters, a term with about 300 years of tradition and only overshadowed by the "Grenadier" (=grenadier) tradition title that Hitler gave all infantry in about 1942 (that lasted till the early 60's, I think).