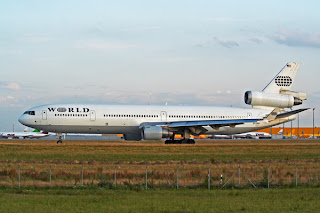 I see that World Airways is still in business and going strong.

An airline whose history is intrinsically linked to the U.S. military!

An airline that does business and makes money primarily through charter service, and most of that made through U.S. government contracts - - flying American troops all over the world!!

"World became a key military contractor during the Vietnam War, flying troops and equipment between the war zone and World's base at Oakland International Airport [OART]"

"During the first Persian Gulf War, World did a substantial amount of profitable business for the military . . . During the mid 1990s, World operated the military passenger trunk route from Osan Air Base, Korea and Kadena Air Base, Okinawa to Los Angeles"

"The airline still receives a substantial amount of its business from the military, especially in its role connecting American bases in the U.S. to the Middle East."

Right! Flying American serviceman to Iraq and other points in the Middle East! A large portion of World business is directly related to American war efforts, past and present? First during the Vietnam era, then Gulf War One and Two, and now during the Global War on Terror [GWOT]!

Recently on television they showed a unit of military policemen from the Iowa National Guard boarding a World jumbo-jet, en route to Iraq!

Young women, stewardesses [I still call them that], greeting the troops as they board! I give those "stewies" a lot of credit. Going into danger and knowing so, and making such flights over and over.

And, the contrast with what was the situation forty years ago, when I first flew World Airways [my initial active duty overseas deployment] is most striking!

Back in my day - - you ONLY traveled in Class A uniform, white-side wall haircut, and inspected before embarkation! If you did not meet standards, you did not fly.

Today - - troops such as the military police unit from Iowa, board a World aircraft wearing BDU with web gear, AND CARRYING THEIR M-16 RIFLE!! [presumably no ammo in their possession?]

A TREMENDOUS CONTRAST TO WHAT EXISTED IN THE PAST!
Nowadays, you are expected to hit the ground running and perform to standard from the get-go!! This is no pleasure cruise [flight]!

Evergreen International Aviation is another company that has done much work for the military as well as just regular aviation work cargo, maintenenace, etc... Rumor has it they've been involved in some very secret stuff. Oddly enough, the same company has a vineyard and sells fruit and fruit baskets. Privately held, they are located in McMinville OR. That's right, the same place as a famous UFO sighting.