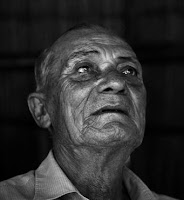 "The Vietnam War was a tumultuous time in American history. The nation at large was divided on whether or not we should be involved in a conflict so far from home. Nevertheless, thousands of American soldiers fought and died in the war. And many more soldiers were taken prisoner by the Vietcong."

"These men were captured, starved, and tormented by the enemy right up until the moment the war ended in 1975. After that, many were sent home, but countless others remained lost: presumed dead. One such soldier, Army Sgt. 1st Class John Hartley Robertson, had apparently found a new life in the Vietnamese jungle and had been living there in secret until he was discovered in 2008. But this Vietnam veteran’s story was not a simple one…."

You need to go read the entire article to learn the rest of the story!!

* Roman legionnaires as captured by the German tribesmen at the Teutoburger Wald repatriated FORTY YEARS later. Having been held as slaves the entire time.

* Many American troops during the Vietnam War gone missing in-country DESERTERS! About a thousand soldiers suspected of being so, based on remittances from family in the United States. Persons as never seen or heard from again after 1975 and communist victory!

Thanks for the image from: magazine.atavist.com

Well against the odds, but not so totally implausible!