From Capt'n CHRIS thanks to Harry at Sharkhunters we have some details of the measures as taken by the Soviet/Russian submarine fleet the purpose of which was to defeat active/passive sonar. Thick rubber slabs on the outside of the hull [defeat active sonar] and an additional "coating" on the inner hull [defeat passive sonar] That latter referred to as de-coupling.

Soviet/Russian submarines their designers preferring a double-hull design for reasons all their own!

As described by Capt'n CHRIS as copied more or less in entirety:

"Russian submarines since the 1950's have used hull coatings - - multiple layers in fact. On early first generation nuclear submarines, like the Project 627A [November] SSN or Project 675  [Echo II] SSGN, the outer hull was coated with Medusa-2, a reversed engineered rubber coating based on the German Alberich. Medusa-2 was purely an anechoic coating. That is it was designed to reduce the submarine's vulnerability to detection by active sonar. There was another coating on the pressure hull that was a decoupling or sound attenuating coating to help reduce the boat's noise signature."

"The next generation of outer hull coating was called 'August' and it was fitted on later second generation and early third generation Russian subs. August was much more robust and heavier than Medusa-2, being 3 inches/76 mm thick and had 'golf-tee' like cavities instead of circular ones. The August coating has been described as multi-purpose in that it had both anechoic and decoupling properties . . ." 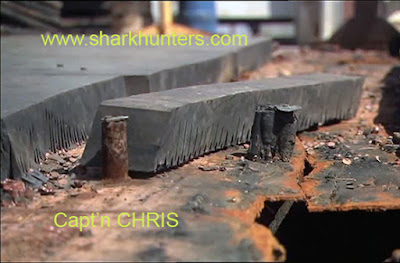 An image of August. That rubber coating is three inches/76 mm thick!!

"When the Project 677E/AMUR-1650 was being advertised, a new external hull coating was also being pushed on the arms market. It is called 'Molniya' and is described as a multipurpose anechoic and decoupling coating." 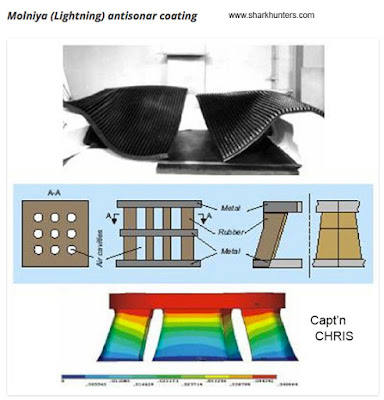 Capt'n CHRIS it seems is an authoritative source in such matters and we thank him for his insight.