Is it a thrashing or is it a threshing?

From the Atlantic and the article by David Frum some more WW1 stuff. A perusal of which is well well worth the effort by the devoted reader to the blog.

"What If the Allies Had Lost World War I?"

"To understand the conflict’s legacy, consider what might have been."

"The question confronting the U.S. in 1917 was the same question that confronted Americans in 1941, and again after World War II, and now again as China rises: Who will shape world order?" 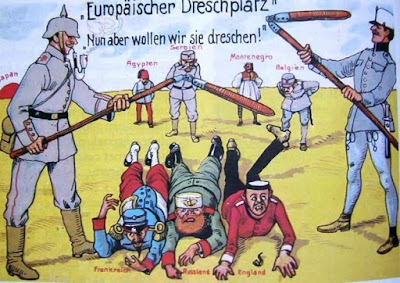 Germans on the left, Austro-Hungarians on the right, French, Russians and English on the ground. WW1 was nearly this way? Those Kaiserschlacht battles of 1918 nearly did destroy the allies on the Western Front. Without American intervention what is shown as a cartoon might have very well been reality! Thanks for the image The Atlantic and (Museum of Hungarian Military History / Wikimedia).

And even if total and 100 % German victory not possible, whatever negotiated settlement to the war might have occurred would have been much to the favor of the Kaiser and his Empire?

At least there would have been no Hitler.