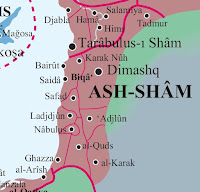 Again from that latest edition of the DEBKAfile newsletter:

"ISIS U-Turns West to Lebanon as Next Target"

"American helicopters Thursday and Friday, March 23-24, dropped Kurdish and Arab fighters over a region west of the ISIS stronghold of Raqqa. Those forces quickly captured at least five villages and so cut jihadist concentrations in the northwestern Syria off from their Raqqa stronghold . . . this operation was the opening shot of the US-led campaign to isolate the Islamic State's Syrian capital before storming it. Escaping ISIS fighters from Mosul and Raqqa are meanwhile heading for the first time to Lebanon."

"ISIS leaders see fresh prey in Lebanon's weak government and army. Lebanon, which is chronically beset with conflicts among the Sunni, Hizballah-Shiite and Christian communities, offers a vulnerable playing field for ISIS inroads."

That land west of the Aleppo/Hama/Homs/Damascus road all the way to the way to the sea coast known from antiquity as al-Shams. The Levant. Of great symbolic value to the Salafist.