Thanks again to the War is Boring Internet web site.

"Rebel tanks were no match for America’s fighting vehicles"

"No match" but the army of the now-deceased dictator Trujillo having an inventory of armor that could be ignored by any invading force however powerful. 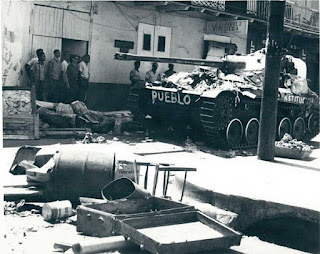 French post-WW2 AMX-13 tank of some pretty good capability. Rough analogous to the American Sherman or Soviet T-34 tank but less well armored. Correctly thought of as being a light tank. 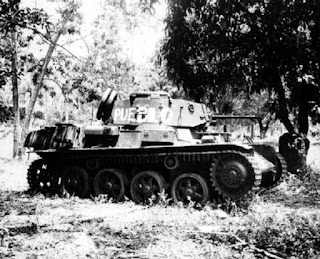 Swedish L-60 tank of the era prior to WW2. A light tank with a 37 mm gun so popular during that era. Roughly equivalent to the American Stuart tank.

More important to the point is that the various Dominican armor maintained in the arsenal and improved upon, refurbished, refitted, modernized for the L-60 and AMX-13 both.

First regarding the Swedish L-60 tank:

"After 'Power Pack' ended, the United States assisted the Dominican Republic in rebuilding its army and twelve of the original twenty L/60Ls were again refurbished and restored to service. These dozen continued in frontline use until 2002. Today one is preserved in excellent, drivable condition as a historical icon by the Dominican Republic army."

Then  with regard to the French AMX-13 tank:

Modernisation packages [for the AMX-13] to include:

See a listing of "Current operators" for the AMX-13 tank most of presumably have those modernization packages.