From Australian Internet media and thanks to same.

"Three undersea spy drones have been caught in Indonesian waters. They appear to be a Chinese design, and they were in shipping lanes crucial for Australia’s security." 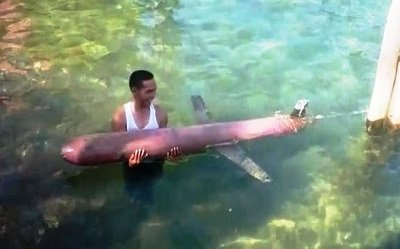 Chinese UUV as shown for a sense of scale. I imagine you can proliferate an area with these the data take immense.

UNTIL RELATIVELY RECENTLY AUSTRALIA ONE OF THE TWO NATIONS IN THE WORLD WITH A GOVERNMENTAL REVENUE SURPLUS. ALMOST [?] EXCLUSIVELY FROM THE EXPORT OF RAW MATERIALS TO CHINA. IRON ORE AND COAL.

Now China and Australia at loggerheads. Continual disclosures and confrontation resulting much less that cordial relations?

"loggerheads - - quarrelling, opposed, feuding, at odds, estranged, in dispute, at each other's throats, at daggers drawn, at enmity "