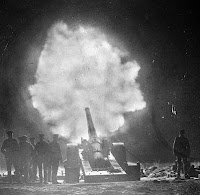 The old ways are the best ways? With regard to the modern [2019] battlefield it may become so.

From Freeper and thanks to same:

"U.S. Field artillery back to learning manual methods after Russian intervention in Ukraine"

"The U.S. Army Field artillery going back again to manual methods of fire direction and gunnery after lessons of Russian intervention in Ukraine. The U.S. Army has not had to contend with electronic warfare during the long wars in Iraq and Afghanistan, but the conflict in eastern Ukraine’s Donbass region showed an increase of electronic attack threat levels. With the growing threat of cyber attacks, the U.S. Army Field Artillery School has placed a renewed emphasis on learning manual methods."

ELECTRONIC WARFARE IN ALL MANIFESTATIONS AS DIRECTED AGAINST AMERICAN ARTILLERY UNITS TO INCLUDE CYBER ATTACK.

"spoof - - INFORMAL - - verb: 1.imitate (something) while exaggerating its characteristic features  2. hoax or trick (someone)."

WE ARE GOING BACK TO THE ERA OF WORLD WAR ONE, IN PARTICULAR THE METHOD KNOWN AS "FLASH SPOTTING" AND "SOUND RANGING".

American military men their abilities at math and arithmetic are questionable? Tables will not be good enough! Hand held calculators and slide rules are going to become predominant again?

Back to the future and then some. Good luck one and all!