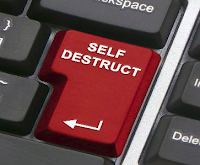 From a question as asked by myself in a previous blog entry:

"Don't these missiles have some sort of self-destruct mechanism if they miss the intended target?"

Syrian SA-5 missile having missed the target continuing on course, hitting a hillside in Cyprus.

And the answer to the question is YES!

As per conversation with an acknowledged aviation authority:

"They are supposed to have both a command-initiated destruct mechanism as well as an auto destruct that self initiates when they fly a certain distance or time without hitting a target. Very unusual; probably a malfunction. The self and auto destruct mechanisms not only  [1] prevent the missile from hitting one’s own civilians . . .  but also to [2] prevent the technology from falling intact into enemy hands."

There you have it. In the nutshell. That this missile after missing the intended target either did not "command-initiated" or "auto destruct" apparently a violation of procedures and protocols.

A major malfunction. Both destructs failed! Hard to think so.