As seen at the PLANES OF FAME AIR MUSEUM, Chino, CA, USA, some displays of P-51 Mustang.

Privately owned war-birds that are all FLY-ABLE! NOT static and gutted military aviation but aircraft that can be flown. 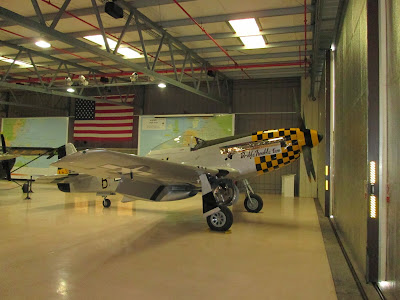 Good looking P-51 Mustang. As rated by Johannes Steinhoff the BEST fighter plane of the Second World War [WW2]. I must admit the Mustang looks sharp. There is an intuitive sense that this airplane will perform well and indeed this is so. The German during WW2 had accumulated enough parts from downed Mustang to assemble a P-51 that was flown by Luftwaffe Experten such as Steinhoff. 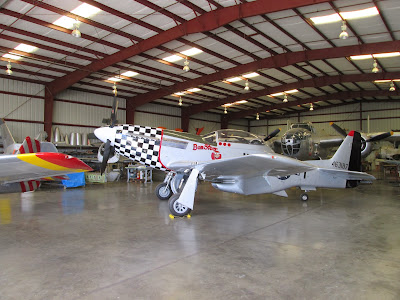 Another superbly refurbished and fly-able Mustang. Goering when witnessing the first flight of P-51 to appear over Berlin is reputed to have said: "at that moment I knew the jig was up". P-51 carrying drop tanks able to conduct the long-range mission, escorting allied bomber aircraft all the way to the target and back.

I recommend without qualification a visit to the PLANES OF FAME museum if you are in the Chino area [Los Angeles]. Well worth seeing.

When we talk about the Mustang fighters, must keep in mind that the British gave the name Mustang.

Similarly, the P-51B Mustang came good fighter only Rolls-Royce Merlin engine after assembly and Spitfire bubble canopy after assembly the plane was the P-51D model,
"the normal" mustang

A pilot friend of mine ( deceased at age 59, flew for the Führer in WWII, never wrote his story, alas ) off-handed said once to a group of us that the Focke Wulf 190D Long Nose could defeat ANY Allied fighter One on One or even Two on One. It came out too late and in too few numbers to make a difference but the plane could climb like a bat out of hell and was maneuverable as well. Its engine was the Junkers Jumo 213A-1 inverted V12 used on Junkers Ju 88 bomber and others.

Yes this is true.
The German problem was the raw materials.
Metal composition / seosten suhde.
They could not do the same for light engines for the Allies.
Had to use a stronger alloy thickness, so the weight was increased.
(versus allies)
Butcher-bird's name was only 190 models.
Nearly all German line engines were upside down.