"Russia’s has received a New Year present with the hand-over of a cutting-edge nuclear attack submarine, the Severodvinsk"

"The Severodvinsk is one of eight Yasen-class (Graney-class, according to NATO classification) attack subs ordered by the Russian navy."

"The second and third boats of the series, the Kazan and the Novosibirsk, are currently under construction and will feature an updated design."

Yasen is the correct designation for submarine according to Russian nomenclature? Graney is the NATO "classification". 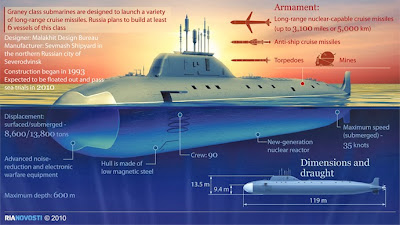 Twenty years from the start of construction until the vessel actually launched and now operational. NOT necessarily combat ready however? Floating but that does equate to combat able?

During that twenty year period modifications and improvements were made to the basic design. and even more capable warship now exists than as originally envisioned?

I guess the consensus opinion would be [??], according to the experts, this class of Russian submarine superior to the best of the Los Angeles class American nuclear submarines, but to a degree inferior when compared to the most modern and advanced  American submersibles, Seawolf and Virginia class.

To what extent "inferior" is the sixty-four thousand dollar question, as they say?

That Russian navy hoping to retain the redoubt system, Borei class intercontinental-range missile launching submarines while cruising in protected waters guarded most assiduously so by that new family and class of attack submarine?

All other classes of Russian submarines, hold-overs from the days of the now defunct Soviet Union taken out of commission and relegated to the scrap heap as a cost-saving measure?