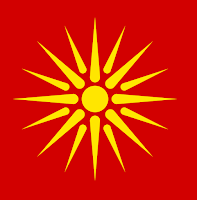 Some damn fool thing in the Balkans?

All of this is rather strange. At least to me.

"Today the transatlantic alliance [NATO] has descended into farce. Earlier this year, NATO invited the small Balkans country of Macedonia to join its ranks. In what now passes for the historic 'Great Game' in Europe, officials anxiously awaited the results of Macedonia’s referendum on a national name change. Approval would allow the Western alliance to augment its collective forces by an astounding 8,000 men and 31 tanks."

Macedonia the nation-state desiring entry into the European Union and eventual membership into the NATO alliance.

All this abhorrent to the Russian? That referendum not even including 50 % of the voting public and is not going to be binding?

See other Internet web sites and articles here and here the topic of which was a variety of outsider machinations. Macedonia as a strategic factor in Balkan and European calculations I think to many the very idea is amusing. But no?

Some damn fool thing in the Balkans must be taken in the context of Sarajevo, the Archduke and his wife, 1914! Hardly that we might never forget.

EVEN IF MACEDONIA IS EVENTUALLY ACCEPTED INTO THE NATO ALLIANCE IN WHATEVER CAPACITY, THEIR MILITARY SO SMALL AS TO BE NO THREAT TO THE RUSSIAN! SO WHY ALL THE FUSS THEN?