From the Internet web site of H. I. Sutton and as extracted an entire article devoted to the Houthi navy to the extent such an entity exists.

"The Houthis have increasingly adopted an asymmetrical naval doctrine focusing on small boats and shore based anti-ship missiles. They have been aided and influenced by Iranian forces. The strategy has scored some modest successes but the advantage remains with the well-equipped Saudi-UAE coalition."

Houthi cockleshell-navy threat currently as existing and consisting of: 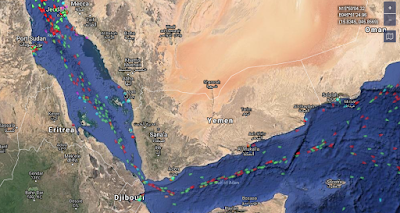 Real-time screen capture [as of only yesterday and thanks to maritimetraffic.com] maritime traffic vicinity Strait of Bab al- Mandab. A crucial choke-point yesterday, tomorrow, forever. Maritime traffic [red and green arrows] moving to and fro, Red Sea and the Gulf of Aden. Click on image to see an enlarged view.

Houthi naval threat even if NO DAMAGE EVER DONE  to a naval or merchant vessel the danger boosting insurance rates making transport by sea in that part of the world  cost-prohibitive!

The Houthi if nothing else resilient and resourceful.