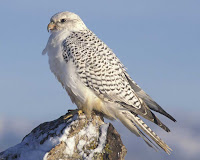 The gryfalcon. The most prized of all the raptors. From the standpoint of the falconer the acme of perfection.

Place this blog entry in the miscellany category, a curiosity and oddity, but not so excessively so. Thanks to the tip from a recent edition of the National Geographic magazine.

Horse racing generally acknowledged as the "Sport of Kings" but consider falconry a close second!

From the time of the Crusades birds as carried with royalty, a symbol of power and wealth. Valued by the Crusader AND THE SARACEN BOTH [Muslims during that period of the Crusades referred to as Saracens].

A gyrfalcon [jer-falcon] belonging to King Philip I of Spain when having gotten loose and captured by the Saracens, the famous Islamic warrior Saladin REFUSING a ransom of a princely sum literally so to be paid for the return of the falcon.

"They were used in the Crusades and were political pawns in wars. Saladin refused to return the 'white gyrfalcon owned by King Philip I [?] of Spain [?]' when it got loose during the Siege of Acre."

One-thousand ducats as offered for the return of the gyrfalcon that amount again refused by Saladin.

By my calculations that amount of one-thousand ducats worth about $160,000 USD as current value!!

All that for one bird! The Saracen and Saladin in particular taking I might assume their perspective the desertion an omen of good, more than anything else retaining the bird as a symbol of good fortune!