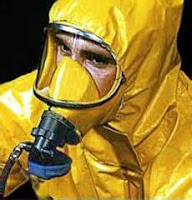 From the Russian media outlet Sputnik and the article by Vladimir Smirnov:

"Rosatom: No Incidents on Russian Nuclear Sites Which Could Lead to Ru-106 Spike"

"Rosatom has spoken out after the Russian Meteorology Agency report confirmed that a high level of ruthenium in [the] atmosphere had been detected; it was reported earlier in October by the European monitoring agencies."

"The Rosatom representative has stated that there were 'no incidents or accidents at nuclear facilities in Russia'. The statement appeared just hours after the  Russia's meteorological service (Rosgidromet) reported that it has detected the record levels of radiation in Russia's Ural regions and a radioactive cloud that drifted over Europe in early October."

See previous blog entries the topic of which was recent atmospheric and man-made radiation of unknown origin: