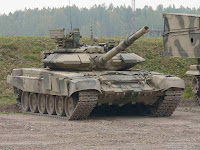 Russian T-90 tank Syria now a done deal? Seems so. From the DEBKAfile:

"On, Dec. 2, Russia started shipping dozens of advanced T-90 tanks to Syria. They were moved immediately to the Aleppo and Damascus warfronts and will soon beef up the combined Syrian, Iranian, Hizballah armies poised to recover Palmyra from the Islamic State. Israel's worry is that Russian instructors will also train Iranian and Hizballah forces in the use of the advanced T-90s. With these tanks, they will attain their objective of a strong front in S. Syria and the Syrian Golan for striking Israel's northern frontier defenses under what is beginning to look like a permanent Russian umbrella."

IT IS NOT WITHOUT REASON THAT THE TURKISH ARMY BEGAN MOVING LEOPARD-2 TANKS TO THE BORDER WITH SYRIA AS HAS BEEN PREVIOUSLY NOTED.