Turkey and Russian again at odds!! As originally seen at Freeper.

"Moscow (AFP) - A Russian destroyer in the Aegean Sea on Sunday used small arms fire to prevent a collision with a Turkish vessel, Moscow said, adding it had summoned Ankara's military attache over the incident. "The crew of the Russian patrol ship Smetlivy . . . avoided collision with a Turkish seiner," the defence ministry said, adding that the crew had fired small arms to warn the boat."

"Seine . . . is a method of fishing that employs a seine or dragnet. A seine is a fishing net that hangs vertically in the water with its bottom edge held down by weights and its top edge buoyed by floats."

My instantaneous reaction was that this is going to be Dogger Bank all over again. As it was in 1904 as it will be in 2015? 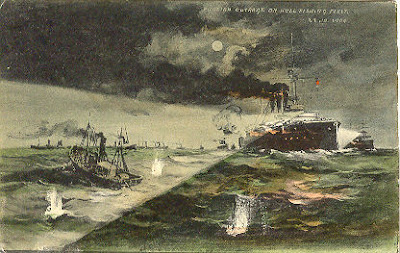 "The Dogger Bank incident (also known as the North Sea Incident, the Russian Outrage or the Incident of Hull) occurred on the night of 21/22 October 1904, when the Russian Baltic Fleet mistook some British trawlers in the Dogger Bank area of the North Sea for an Imperial Japanese Navy force and fired on them. Russian warships also fired on each other in the chaos of the melée. Three British fishermen died and a number were wounded. One sailor and a priest aboard a Russian cruiser caught in the crossfire were also killed. The incident almost led to war between Britain and Russia."

ONE RUSSIAN WARSHIP HAVING FIRED FIVE-HUNDRED ROUNDS NOT ONE OF THEM STRIKING HOME SUCH WAS THE ABYSMAL GUNNERY THOSE SAILORS OF THE BALTIC RATHER INCOMPETENT!