Yet one more story that can be seen as possible propaganda directed against the Islamic State?

"Daesh (ISIL/ISIS) continues to propagate its intolerant ideology of hatred, anti-humanism and the cult of death among children, distorting the teachings of Islam to suit their sectarian doctrine."

"Daesh-affiliated Boko Haram has deployed children as young as 8 years of age to the front lines for use as human shields." 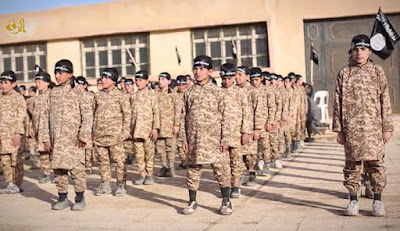 This image reportedly shows Cubs being given indoctrination training. Little automata [robots] being taught to kill! Teaching hate to children deplorable under all circumstances.

That incorporation of young people into all military operations a trademark of ISIL and affiliates. Suicide bombers, human shields, youth soldiers. Even the use of mentally challenged young people as human bombs!

Propaganda with the intention of describing Daesh and affiliates as monsters? Engaging in odious practices as policy, institutionalized.