Speak of the devil!!

Here with the photo shoot of the woman jihadist as having rallied to the cause of ISIL.

"'I will only come back to Britain to raise the black flag'..."

"Jihadist Aqsa Mahmood broke her silence yesterday to warn Western Muslims that it’s ‘us against them’ and to ‘pick a side’ in the war." 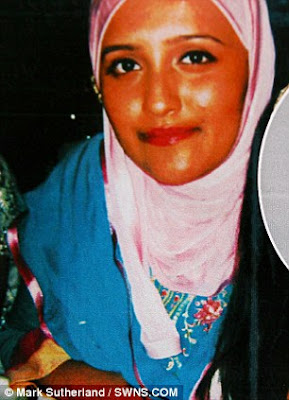 Aqsa now refers to herself by the nom de guerre of Umm Layth.

"On the 13th anniversary of the 9/11 attacks, Mahmood posted her diatribe in a third installment of her online ‘Diary of a Muhajirah (immigrant)’ – in which she also said she would only come home to raise the black flag of IS over Britain."

"The 20-year-old – who married an IS fighter in February – added: ‘The only time we will ever, ever return to those lands beithnillah (if God wills) is to raise our flag.’"

Described as Scottish born and raised. A Scots woman.

"Just because one is born in a barn does not make one a horse."