The hedgerows of Normandy.

"Fighting in The Hedgerows"

"Converted for the Web from 'Citizen Soldiers: The U.S. Army From The Normandy Beaches, To The Bulge, To The Surrender Of Germany' by Stephen E. Ambrose"

That American soldier having landed at Normandy, 6 June 1944 and moving inland in very short order encountering a terrain unlike any other on the planet, and most suited for the defense. A terrain and German defenders making most of same, and for which the U.S. Army in advance was neither aware of or had properly trained for.

"No terrain in the world was better suited for defensive action with the weapons of the fourth decade of the twentieth century than the Norman hedgerows, and only the lava and coral caves and tunnels of Iwo Jima and Okinawa were as favorable." 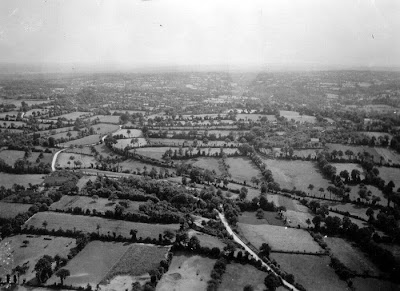 The hedgerows of Normandy as seen from the air. Those fields and boundaries of same as designated and marked from over a thousand years earlier!

"The Norman hedgerows dated back to Roman times. They were mounds of earth to keep cattle in and to mark boundaries. Typically there was only one entry into the small field enclosed by the hedgerows, which were irregular in length as well as height and set at odd angles. On the sunken roads the brush often met overhead, giving the GIs a feeling of being trapped in a leafy tunnel. Wherever they looked the view was blocked by walls of vegetation." 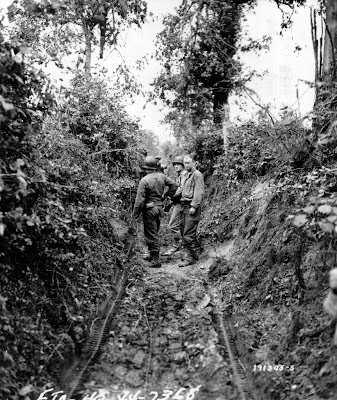 That sunken lane [a footpath actually] below ground level. Either side of the lane that mound of earth planted with hedges. Beyond that an open field and the Germans defending at the far end of the field.

Overwhelming American advantage on the ground and in the air negated by the hedgerows. Artillery, tanks, close-air-support tactical aviation of little or any use in such a situation. Light infantry against light infantry, DEFENSE IS THE STRONGER FORM OF COMBAT! Easier to do and you can accomplish more with less. Good German troops occupying suitable terrain making for a formidable adversary.