We have been aware of the "Nine Dash Line".

As duly noted and reported by the Filipino media.

Further claims and encroachment by the Chinese into what is deemed as Filipino Economic Exclusion Zone [EEZ]. 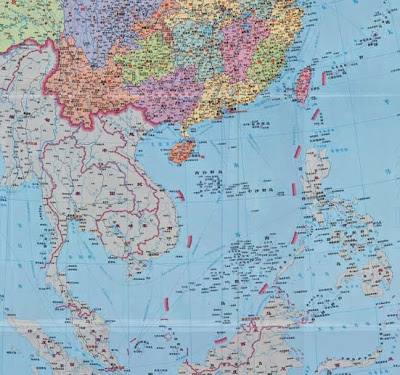 All areas within the dashed line area as claimed by China.

"The new Chinese map, which was first published last January by China's state mapping authority Sinomap Press, features 10 dash lines instead of nine dash lines to mark a huge swath of the South China Sea in a tongue-shaped encirclement as Chinese territory."

"China's nine-dash line claim in the South China Sea, it added, "encroaches on the sovereign rights and jurisdiction of the Philippines" and in Bajo de Masinloc or Scarborough Shoal, site of a standoff last year between Chinese and Philippine ships."

The beat goes on.

The UNITED STATES TOO HAVING A BINDING AND LEGALLY OBLIGATING BI-LATERAL DEFENSE TREATY WITH THE PHILIPPINES.