More images from a recent trip the length of the Santa Fe Trail as it existed in the old days.

Following the route as close as possible [this can be done pretty accurately] in both directions, the mountain route and the Cimmaron route.

And a visit to the ruins of Ft. Union,, New Mexico Territory. [Ft. Union just west of Interstate-25 about half way between Santa Fe and Raton, New Mexico.

For a period of decades and during the American Civil War Ft. Union perhaps that most important American military installation west of the Mississippi river.

Having an organic combat capability and also a supply depot of some scale.

All other military forts and camps located in the American Southwest receiving supplies and rations, beans and bullets from that depot at Ft. Union.

Of the fort today, not much exists!

A national historic site maintained as best can be, ruins only a fraction remaining of what originally was. 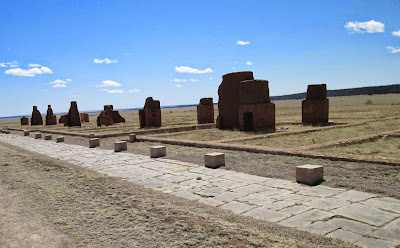 The officers quarters at Ft. Union. Finished paving stone running parallel to the drill grounds. Quarters made of adobe brick plastered on the outside. Remnants as they exist now primarily the chimneys and stone foundations. NOT much more.

Storehouses for the depot. Sturdily built again of adobe brick plastered on the outside. Rather more of the construction still standing, the interior of those buildings when the fort occupied full of supplies, the depot manned by a goodly number of civilians as hired from the surrounding area.

Good image of the officers quarters looking from across the parade ground. American Stonehenge. That is the snow covered Sangre de Cristo mountains in the background. Brilliant sunny day as mostly is the case in the high plains of New Mexico.

Ft. Union having lost all usefulness with the building of the railroads, the fort abandoned and left to the elements, the desolation quite profound.