A somewhat dated report now but still worthy of consideration. Especially when taken within the context of the current crisis in Ukraine.

From MARCONI through Harry at Sharkhunters:


"I checked a couple of ship tracking sites and learned that the Nikolay Chiker's position at the time of the transmission was about 30.6301 N / 81.0776 W which is off the coast of Fernandia Beach, Florida. With the conflict currently going on in the Ukraine, it is interesting to note that the tug's position is very close to the major US Navy Submarine Base at Kings Bay, GA as well as to the US Navy Station - Mayport, which is the home of the US Navy's 4th fleet. Apparently the Chiker has been in that vicinity for several days."

Nikolay Chiker a large ocean-going Russian tug. Seems very large for a tug to me but then is ocean-going so perhaps that is standard for such vessels. 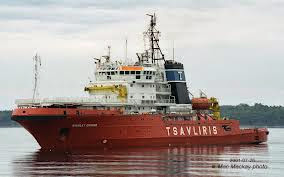 An image of the Nikolay Chiker.

As of this almost exactly instant, at least only seven minutes ago as the time of this post, the position of the Nikolay Chiker is:

[amazing what can be found on the Internet, isn't it? ]

Further more we have from another web site more info on the Chiker:

"The Nikolay Chiker is widely considered to be one of the worlds most powerful ocean tugs, but more important from this observers perspective, the tug seems to always be escorting high value assets of the Russian Navy when it deploys."
. . . .

"In addition to that though, during previous visits to the US east coast by the tug, US media reported that Nikolay Chiker escorted Russian nuclear attack submarines that were patrolling our coast at the time. Given circumstances taking place in Ukraine, I think it is very possible that Nikolay Chiker is staying near Cape Canaveral for legitimate reasons (to monitor the launch) but is also standing nearby as one or more Russian nuclear attack submarines monitor US Navy activity out of Kings Bay, Mayport, and or Norfolk during a period of political crisis between the US and Russia."

The Nikolay Chiker has below water torpedo tubes? More than a mere tug? Has a possible organic combat capability with GRU naval spetsnaz personnel "embedded" with the crew? I believe King's Bay is the home of a Trident submarine force the activity of which would be of extreme interest to the Russian military command.

It looks like The Nikolay Chiker is headed back towards Kings Bay... ETA April 15 at current course and speed.