That U.S. Navy SEAL team assaulting the Bin Laden compound as has been known for some time attack dog equipped.

Some details of that mission:

That breed of choice for all [?] special operations units [at least those of the "western" military persuasion] the Belgian Malinois.

"The breed is similar to a German Shepherd but a bit smaller/more compact -adult male 65 lbs- [about thirty kilograms] and is therefore considered better for various parachute jumping and rappelling operations with the USN's SEAL teams." 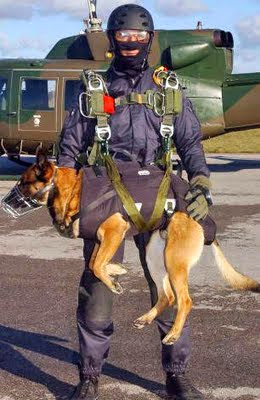 SEAL parachutist with dog. Dog muzzled and strapped to the man. When hitting the ground the two operating as intended as a TEAM!

Malinois can be carried by one man easily but still capable as a breed with aggressiveness and the suitable size to taken on a larger opponent.

Also, Cairo leading the way for the SEAL's, dedicated to the mission, even in the aftermath personally presented to President Obama. A rare and great honor indeed!

"This particular dog [Cairo the dog] was the one who first entered the Abbottabad compound the night that SEAL Team Six got Bin Laden."

Attack dogs that are parachute and rappelling qualified, suitable for SEAL oceanic missions where parachuting into the water is a requirement. Attack dogs body armor equipped and having an attached real-time TV feed camera, even some sort of night-vision goggles!! 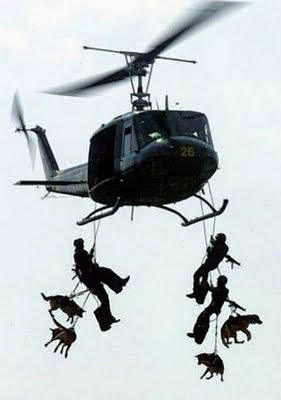 Here dogs and handlers rappel from a chopper. Have a nice ride down

See previous blog entries regarding the use of dogs in modern combat situations.

NOT merely a SENTRY dog as that term understood but an attack dog able to carry the fight to the adversary.