Thanks to the Joseph Rosendo travel log program as seen on public television we have the story of the 108 Chortens.

Bhutan a small landlocked kingdom of only 600,000 persons, now an exotic but popular tourist destination AND THAT ONE PLACE IN THE WORLD YOU MIGHT THINK IS EXEMPT FROM CONFLICT, STRIFE AND WAR.

It can even be suggested that Bhutan is the modern-day version of the fictional Shangri-La:

"Shangri-La is a fictional place described in the 1933 novel Lost Horizon by British author James Hilton . . . Shangri-La has become synonymous with any earthly paradise, and particularly a mythical Himalayan utopia — a permanently happy land, isolated from the outside world."

But not necessarily ALWAYS SO!

Those 108 chortans commemorating the death of Bhutanese soldiers only recently as of 2003 battlefield deaths, their loss memorialized.

"chor·ten - - noun  (in Tibet) a monument to a distinguished Buddhist, especially a lama."

That "volunteer army" of Bhutan self-described [Bhutan under normal circumstances does not have a standing military force] expelling an invading force of insurgents [Assamese] in conflict with the New Delhi central government of India.

Those Assamese seeking and creating a privileged sanctuary, this to be denied, the Bhutanese cherishing their liberty and freedom as an independent kingdom.

"the most intriguing landmark of this place is the newly constructed 108 chortens. The Chortens were built in 2005 as an atonement for the loss of life caused by the flushing out of Assamese militants in southern Bhutan"

Those chortens in true Buddhist style not exalting victory but rather accentuating sorrow "commemorate the deceased"! 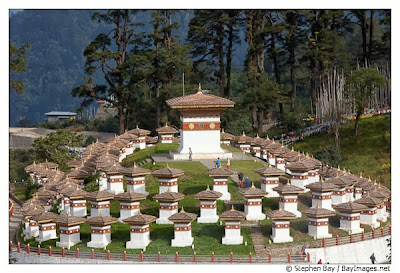 "The 108 chortens were built by Queen Mother to honor the Bhutanese soldiers who were killed when fighting the Indian rebels in 2003. Bhutan was forced to repel the rebels as failing to do so, India threatened to enter the country to do so themselves. The 4th King led a volunteer army of about 7,000 men to force the rebels to exit the country. Though Bhutanese have wanted to build this chortens to mark the victory of Bhutanese army, the King has rejected this offer and instead uses the chortens to commemorate the deceased."

From the South Asia Terrorism Portal [SATP] we have the timeline and assessment of the situation in Bhutan:

"Bhutan Prime Minister Lyonchhen Jigmi Thinley said that law-breakers from Assam, especially militant groups including the United Liberation Front of Asom (ULFA), will not be allowed to take refuge in his country."

"The Shangri-La like cocooned existence of Bhutan is now under grave threat. The spreading influence of the electronic media and the convergence of democratic ideals among the middle class that transcends ethnic divisions threaten to come into conflict with entrenched vested interests within the royal establishment.".

"You will be hearing of wars and rumors of wars . . . For nation will rise against nation, and kingdom against kingdom: - -   Matthew 24:6"

"War and rumor of war". Even in Bhutan it is so!