"before there was Costa Concordia there was Oklahoma"

Thanks to the Telegraph we have the slide show of the USS Oklahoma being raised from the bottom of Pearl Harbor. That process of parbuckling a "proven method" to raise a capsized ship current being used during the salvage operation to refloat the stricken cruise ship Costa Concordia.

"Engineers on Monday succeeded in wresting the hull of the shipwrecked Costa Concordia from the Italian reef where it has been stuck since it capsized in January 2012, leaving them cautiously optimistic they can rotate the luxury liner upright and eventually tow it away. The operation, known in nautical parlance as parbuckling, is a proven method to raise capsized vessels."

Salvage operations on such a gigantic scale rarely attempted, that enormous mass of steel having to be moved from an awkward position an engineering problem and endeavor to be carried out on an almost biblical scale.

"The USS Oklahoma . . . was parbuckled by the U.S. military in 1943 after the Japanese attack on Pearl Harbour."

"The righting and refloating of the capsized battleship Oklahoma was the largest of the Pearl Harbor salvage jobs, and the most difficult . . . Its purpose was mainly to clear an important mooring berth for further use, and only secondarily to recover some of Oklahoma's weapons and equipment." 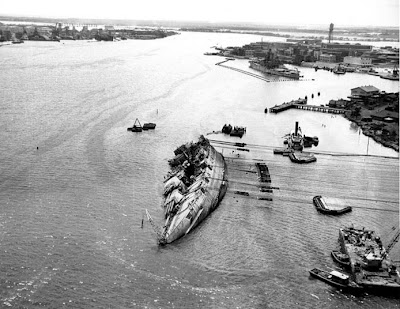 Here the sunken Oklahoma in the process of parbuckling. Twenty-one cables with an identical number of cranes and winches pulling the ship upright.

NEVER was it the intention to bring the Oklahoma back to active service. Some weaponry salvaged, the potentiality of using those main guns in a coastal defense role contemplated?

That ultimate fate of the USS Oklahoma even after refloating also very sad. Sunk and settling to the abysmal depths while undertow, headed for the salvage yard.

"After several months in Drydock Number Two, the ship was again refloated and moored elsewhere in Pearl Harbor. She was sold to a scrapping firm in 1946, but sank in a storm while under tow from Hawaii to the west coast in May 1947."

Thanks once more for the excellent slide show as presented by the Telegraph.