Those two Syrian Su-24 combat warplanes somewhat of a mystery to me.

From only today approaching Cyprus and intercepted by British Typhoon Eurofighters that Sukhoi however not a designated dog-fighter or air superiority combat aircraft.

Su-24 [NATO code name Fencer] more of a ground attack aircraft, a fighter-bomber have a somewhat limited multi-role capability but perhaps better thought of as having a mission as a Soviet/Russian frontal aviation asset, supporting the army troops during an offensive.

Fencer nonetheless having an air-to-air combat capability without question.

"The Sukhoi Su-24 (NATO reporting name: Fencer) is a supersonic, all-weather attack aircraft developed in the Soviet Union. This variable-sweep wing, twin-engined side-by-side two-seater carried the USSR's first integrated digital navigation/attack system. It remains in service with former Soviet air forces and various air forces to which it was exported." 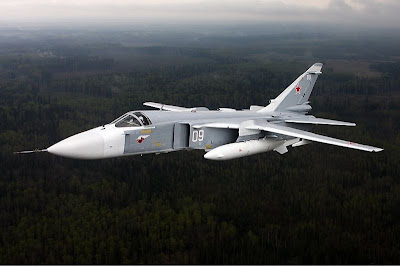 NOT a bad looking airplane. Wings swept back or forward depending on the mission.

Indeed, the Fencer THE SOVIET RESPONSE TO THE F-111? That F-111 developed many years ago originally and now relegated to the scrap heap, gone forever.

Two crewmen sitting side by side in the cockpit, variable geometry aircraft, [wings either swept back or forward], a warplane envisioned as being able to perform a variety of missions and do them well.