To war with typewriter!

"The Military Service of JD Salinger". That famous and semi-reclusive American novelist J.D. Salinger, generally thought of as a man of mystery having a rather distinguished war record [WW2] unknown to most people.

For a period of about sixty years [!!], Salinger, most famous for his novel "Catcher in the Rye", leading the life of the semi-recluse, a very private person, not welcoming the media attention or the fame that was his due. Only several years after the death of Salinger are many aspects of his life becoming public. 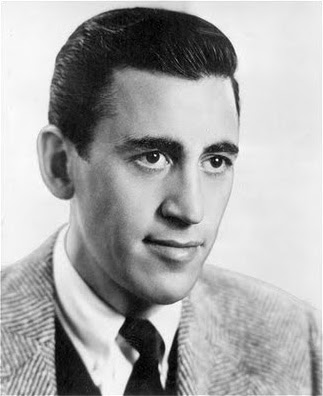 "Before he wrote the Catcher in the Rye, author JD Salinger was a military man who served in some of the bloodiest battles of WWII"

Salinger a sergeant in the American Counter-Intelligence Corps [CIC] during  the conflict, his service most admirable.

"In April 1942 Salinger was drafted under Selective Service and assigned to the Army . . . In October 1943 he attended training for counter intelligence at Ft Holabird, Maryland. Assigned to the intelligence section of the 12th Infantry Regiment, 4th ID he waded under German machine guns ashore on Utah Beach on D-Day with a typewriter in his pack."

From the slide show as seen at the Suite 101 web site an apparent photograph of Salinger exists wading ashore on Utah beach, M1 carbine in one hand, typewriter in the other. That is him?

Salinger participating in the various campaigns following the Normandy landings unto the surrender of Germany. To include:

* Battle of the Bulge.

* Liberation of a concentration camp.

And in the aftermath of German surrender also as a civilian  contract worker for the U.S. government. Undoubtedly in some counter-intelligence capacity.

"For the next eleven months he and his unit were involved in fierce fighting in the Hedgerows, the port of Cherbourg, Liberated Paris and pursued the Germans into the Hurtgen Forest. There he endured the frozen hell of frostbite, trench foot and the oncoming Nazi Panzers in the Battle of the Bulge. He entered Germany with his regiment and helped to liberate a concentration camp and participated in the interrogation of captured enemy prisoners of war."

That "INTERROGATION" perhaps engaging in political dialog in a genial but sincere manner with German military men, those officers primarily of company grade rank, persuading them to further eschew the Nazi ideology?

Salinger too suffering from combat fatigue, self-checking himself into a hospital.

"Shortly after the close of hostilities, Salinger suffered a post traumatic stress induced nervous breakdown and was hospitalized."

That war record of Salinger encapsulated in a single short story?

"It is thought that his profound short story 'For Esme, with Love and Squalor,' written around a character who was a broken soldier, came from firsthand experience."

That "semi-reclusive" lifestyle of Salinger a result of war experiences? This is a matter forever that will be in the realm of speculation, I assure you.