From the Daily Mail we have the story of an English hero. An British soldier standing very tall, without question a man who even when OFF DUTY demonstrating a heroism almost without measure or equal.

"SAS hero of the mall massacre: Off duty soldier with a handgun saved 100 lives as terrorists ran amok"

• "Was having coffee at Westgate mall when it was attacked on Saturday"
• "Returned to building a dozen times, despite intense gunfire"
• "Sources said the soldier was with the Special Air Service, or SAS"
• "Man, who can't be named for security reasons, was pictured with victims" 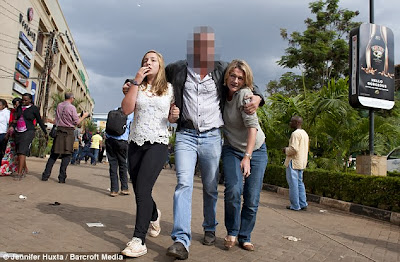 "‘He went back in 12 times and saved 100 people. Imagine going back in when you knew what was going on inside.’"

This man deserves without question the Victoria Cross [VC]  Highest military award that can be bestowed on an English soldier.

Whether in secret or not, presented to the troop from the hands of the Queen herself.

SAS the personnel of which the only English military allowed to carry weapons under law within the confines of British territory. Such is the type of missions and duty they maybe assigned.