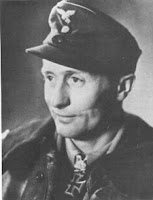 WWII: "From your wide experience, which aircraft was the most difficult to attack?"

Steinhoff: "The B-17 Flying Fortress without a doubt. They flew in defensive boxes, a heavy defensive formation, and with all of their heavy .50-caliber machine guns they were dangerous to approach. We finally adopted the head-on attack . . . but only a few experts could do this successfully, and it took nerves of steel."

"After examining wrecked B-17s and B-24s, Luftwaffe officers discovered that on average it took around 20 hits with 20 mm (0.79 in) shells fired from the rear to bring them down. Pilots of average ability hit the bombers with only about two percent of the rounds they fired, so to obtain 20 hits, the average pilot had to fire one thousand 20 mm (0.79 in) rounds at a bomber. Early versions of the Fw 190, one of the best German interceptor fighters, were equipped with two 20 mm (0.79 in) MG FF cannons, which carried only 500 rounds, and later with the better Mauser MG 151/20 cannons, which had a longer effective range than the MG FF weapon. The German fighters found that when attacking from the front, where fewer defensive guns were pointed, it only took four or five hits to bring a bomber down. To address the Fw 190's shortcomings, the number of cannons fitted was doubled to four with a corresponding increase in the amount of ammunition carried"

* It was not so much that the Luftwaffe pilots were inept as it was more that the B-17 was also a very difficult plane to shoot-down. The plane had a lot of staying power and was able to sustain a lot of damage - - remain in the air and often return to base crew intact!!

* Head-on attack did produce good results but as Johannes states was for experts ONLY and then ONLY those with strong nerves. The USAAF belatedly added a chin-turret to the B-17 to counter the head-on attack when it was realized that the bombers were vulnerable from this sort of encounter.

* Doubling the number of 20 mm cannon on the Fw-190 and incorporating additional ammo only meant that the performance advantage of the super-fast interceptor to a degree was compromised? Perhaps not!

* Those figures of obtaining hits from only 2 % of the rounds fire should not surprise? In modern ground warfare, anti-tank guided-missile gunners who achieve a 95 % accuracy rate in training are only able to hit the target 20 % of the time in real live combat!! When the adrenaline is flowing, your hands are shaking, and you know someone is trying to kill you, it becomes complicated very fast!