Again from a previous blog entry:

"The German fighters found that when attacking from the front, where fewer defensive guns were pointed, it only took four or five hits to bring a bomber down."

"The USAAF belatedly added a chin-turret to the B-17 to counter the head-on attack when it was realized that the bombers were vulnerable from this sort of encounter."

The B-17 bomber was susceptible to attack from the front. This was unanticipated? That nose of the warplane was normally where the navigator and bombardier sat, and WAS equipped with two front firing fifty [.50] single barrel machine guns [these were called chin guns?]. During an attack the duties of those two crewmen [navigator & bombardier] distracted them from dedicated defensive duties, and head-on attack by the most dedicated, brave, and skilled German combat aviators was then possible. The B-17 LESS well defended at the most critical moments?

A chin-turret belatedly fitted to the nose of the B-17, forward firing dual barrel fifty [.50] caliber machine guns being the solution to the danger from frontal attack. 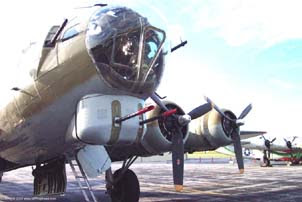 Those guns in the turret operated remotely either by the bombardier or navigator, I do not think an additional crewman was needed or added to the original TO& E of the warplane. NO ROOM for another man either. 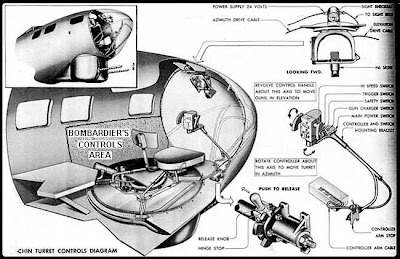 My intuition too tells me that that four or five hits FROM THE FRONT to bring a B-17 down were more from deaths and injury to the pilot and co-pilot rather than damage to the plane!

See here a YouTube video of a B-17 landing as seen from the nose section of a modern flying aircraft. The controls for the chin turret can be seen in the upper right, and what appears to the the cross-hairs of a "chin gun" in the upper left. Center is the Norden bomb sight.