Here with additional images of the Second World War:

As taken from the continuing series in the Atlantic Magazine. Thanks to the Atlantic in all cases and the tip from Ken!

In Focus with Alan Taylor

"World War II: After the War"

Photographs, black and white predominantly, taken in the AFTERMATH of the war. NOT necessarily iconic images but each and everyone well worth viewing.

In general, when discussing war, think of what led up to the war, the fighting of the war itself, and the aftermath of the war, what was the outcome and what transpired at the conclusion of hostilities.

Three images in specific I have chosen from the collection for comment. 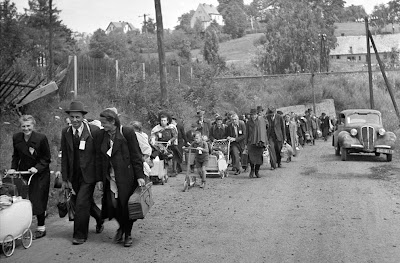 Sudeten Germans forced to flee Czechoslovakia and return to the German homeland. EXILED - - told to go and now! About 15 million such persons, ethnic Germans, told to leave locales all over eastern Europe and not return in the aftermath of WW2. About 1 to 2 million persons estimated to have perished along the way, AFTER THE WAR WAS OVER! 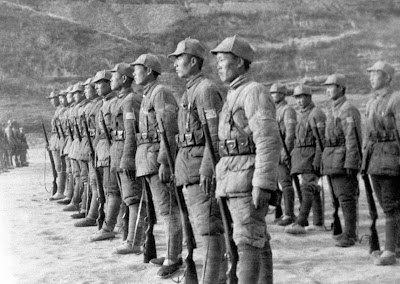 Chinese Communist troops of the Eighth Route Army. Rated by Evans Carlson prior to WW2 as the BEST military unit in the world for performing it's mission. This entire army defecting en masse to the communist side, men, officers and gear intact. NOTE the standard uniform, battle kit and weaponry. The communist military force under Mao to a large extent was not a rag-tag guerrilla motley crew!! 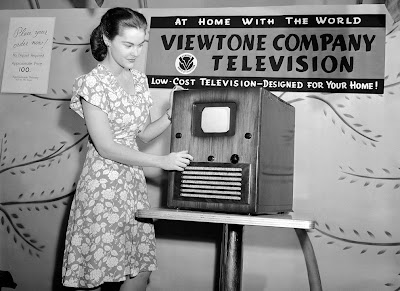 American housewife in 1945 with newly purchased television set. It can safely be said that there existed an America prior to WW2 and an America in the aftermath of WW2 and the two societies were radically different. The latter enjoying a general level of prosperity, security, ease and comfort that is not to be seen perhaps ever again! In 1939 only one in four [1/4] of the American adult male population could own an automobile and in contrast by 1947 nearly 100 % of American adult males were able to own an automobile. A marked change to the consumer society that has not abated since!
For some reason the black and white photography of the era has a certain appeal to me. Those photographers of the era were not only excellent technicians but had an artistic talent and an ability to tell a story, all rolled into one.