Here with a follow up to the previous bio-warfare blog entry.

Again, the topic that small-pox vaccine, to be given to the infected AFTER they have shown symptoms of smallpox. Persons NOT prior inoculated but with this particular anti-dote standing a much better chance of survival. So is the thought. Normally about one-third [1/3] of those contracting smallpox perishing!

Thanks in this case to the Chicago Daily Observer.

Please note carefully the image that accompanies this particular Daily Observer article. An image that only reinforces a terrible lie and calumny directed against the American nation as a whole.

"calumny - -  noun 1. a false and malicious statement designed to injure the reputation of someone or something" 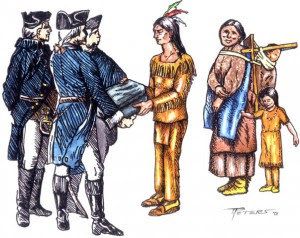 An image that purports to show British military officers presenting smallpox infected blankets to American Indians. The historical truth as generally presented being that such blankets infected with smallpox were used as a means of bio-warfare during colonial times, contaminating entire American Indian tribes, a genocidal extermination done with almost diabolical and malevolently evil fervor.

A calumny dispelled by the observations of the radio talk show host Michael Medved. From the web site of Michael:

“America Was Founded on Genocide Against Native Americans” - - Michael Medved

"The 10 Big Lies About America"

"But didn’t British authorities, and later the Americans, show criminal intent when they deliberately infected innocent tribes with the deadliest of eighteenth-century diseases?  Whenever callers to my radio show begin talking about the premeditated mass slaughter of Native Americans, it’s only a matter of seconds before they invoke the diabolical history of 'smallpox blankets' — the bedding and clothing cunningly provided to unsuspecting tribes in order to infect them with the variola major virus…"
. . . .

"The horribly misleading charges about germ warfare have achieved a monstrous life of their own, leaving many (if not most) Americans with the impression that diseases that decimated native populations resulted from a conscious, long-standing policy of the U.S. government.  No such master plan for mass murder ever existed, of course, so that all efforts to scour abundant bureaucratic records have produced only a few nasty postscripts in letters from British — not American — officials in 1763, and the largely exculpatory evidence concerning an epidemic in Mandan territory in 1837…"

It seems to be true that in some letters as addressed to his subordinates, General Sir Jeffrey Amherst, commander of English troops in British North America during the French and Indian War, DID PROPOSE AND DID THINK ABOUT SUCH A BIO-WARFARE CAMPAIGN! Thought about it and proposed it but a campaign of eradication using smallpox NEVER OCCURRED.

Disease did decimate the American Indian population of North America on a massive scale, this is clear and undeniable. From a variety of illnesses to which they had no immunity at all, American Indians died in just catastrophic numbers. Smallpox, influenza, malaria, mumps, measles, the common cold in all manifestations, etc. As best as can be determined, however, WAS NOT part of a conscious plan or military policy.