"very intelligent, charismatic, has a respected position, is into collecting antiques, interested in the arts"
"the nicest guy -- charming, intelligent, friendly"
Here thanks to Yahoo news with the story of Dr. Marcel .

A Frenchman residing in Paris during the Second World War [WW2], taking advantage of a situation - - offering succor to Jews wishing to escape the clutches of the Nazi, our good Dr. Marcel a heinous and unforgiving serial killer - - and all the while the most charming of men. 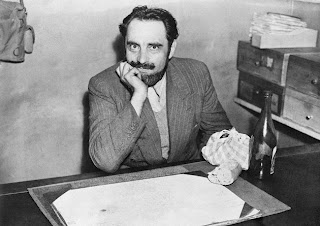 Dr. Marcel found guilty of twenty-six murders and meeting his deserved end - - his head lopped off by the guillotine! THAT FINAL TOTAL OF VICTIMS THOUGHT TO BE MUCH HIGHER, PERHAPS IN THE HUNDREDS!!

Extorting money from Jews with a false promise of safe passage, murdering those unfortunates and disposing of the body parts in a grisly manner. And only accidentally found out - - the situation in Paris at the end of the war chaotic, the authorities not so much concerned at the time with disappeared persons or even to deal with the circumstances in the normal manner!

We all have too an intuitive sense that during wartime a lot of "things" that would not ordinarily transpire during a time of peace occur with frequency! Dr. Marcel was surely not ALONE in taking advantage of a situation, a malevolent mentality cold and calculating being presented with opportunity for gain of an evil sort!

If you know how to heal you surely know how to kill. Dr. Marcel having also at his disposal with good reason chemicals and instruments to facilitate his dirty deeds, AND a "clientele" desperate under the circumstances most trusting of such a charming man. Those least you would suspect are the ones you must be most wary of? Seems so in the case of Dr. Marcel.