From another blog entry: "This replica is an American enterprise? Normally the British are very good at this stuff. Recreating old designs and determining feasibility of ancient concepts. The Greek trireme or Mr. Babbage's computational machine, for instance."

Here from the English TimesOnline, the obituary of Sir Charles Willink. But much more than an obituary.

"Sir Charles Willink was a scholar, a classicist and a schoolmaster. He was one of the visionaries who in 1975 launched the project of reconstructing a Greek trireme, the warship from which ancient Athens ruled the seas". 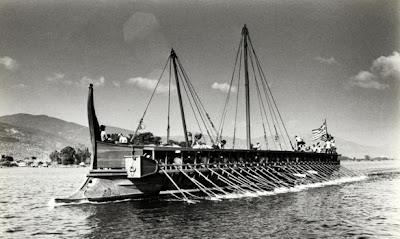 "The trireme (in Greek trieres) was the ship that built the Athenian Empire . . . With it the small Athenian fleet drove the great Persian armada of Xerxes from the Mediterranean at the Battle of Salamis in 480BC. But how the trireme worked was a mystery"

"no one knew how the trireme worked, or believed that it could have been rowed as fast as its ancient spinners alleged"

NOT only saved the Greeks from invasion and defeat with the naval victory over the Persians at Salamis, but warships that allowed the ancient Greeks to "project power" over the entire eastern half of the Mediterranean.

And the question, the mystery of HOW the trireme "worked" was primarily as to the positioning of the rowers, the oarsmen, how they worked in synchronicity to propel the ship forward. The trireme relied ONLY [?] upon the muscle power of the rowers during combat? FREEMEN at the oars, not slaves!

The inspiring force behind the re-construction of the Greek trireme was Sir Charles! With money donated by the Greek government, the English did succeed in constructing an actual floating, working replica, English university "crew" [oarsmen] at the oars.

And the ship did work and famously so.

"On an Athenian trireme of the Classical period there were 170 oarsmen, ten marines, four archers and sixteen sailors, including the helmsman, making a total of 200"

The ancients understood very well the need for combined arms. Even on warships. Had a contingent of sailors [exclusive of the rowers], marines, and archers. When closing on an enemy vessel, would first RAM, the archers picking off enemy sailors, crew, commanders, and the marines boarding the enemy ship to create as much mayhem as possible - - guarding their own vessel against potential enemy boarders. Oarsmen were strictly for propulsion - - not involved in the fighting!!

Re-creations of this type are normally within the strict purview of the English? The Britishers do so love things with ancient lineage. And have the necessary eccentrics, experts, "boffins", "dotty-types" that are very talented and learned and can do this sort of stuff well?