Here from the DEBKAfile:

"Iran loses its only AWACS as Ahmadinejad threatens the world"

From just a couple days ago now, a demonstration of Iranian military prowess that went awry. Upsetting to any and all machinations of the central ruling authority in Tehran?

NO WHERE ELSE has this been covered?

The SOLE Iranian AEW aircraft collides with another aircraft, crashes and burns. This is a Russian AWACS A-50 model based upon the Il-76 transport aircraft. 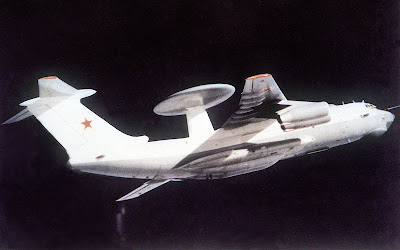 "Up above a big military parade in Tehran on Tuesday, Sept. 22 . . . two air force jets collided in mid-air. One was Iran's only airborne warning and control system (AWACS) for coordinating long-distance aerial operations"

"The proud military parade . . . was planned to give Ahmadinejad a dazzling send-off for New York and add steel to his UN Assembly speech Wednesday."

"Dubbed "Simorgh" . . . the AWACS' appearance, escorted by fighter jets, was to have been the climax for the Iranian Air force's fly-past . . . Instead, it collided with one of escorting planes . . . and both crashed to the ground in flames. All seven crewmen were killed."

"The loss of this airborne control system has left Iran's air force and air and missile defenses without 'electronic eyes' for surveillance of the skies around its borders."

This Il-76 originally belonged to the air force of Saddam! Was transferred to Iranian control prior to the outbreak of the First Gulf War in 1991! Was refurbished and reconstituted as an AWACS aircraft! Has now "bitten the dust"!

The Iranians seem to have more than their fair share of aircraft disasters, missile failures and premature weapons detonations? Something or someone is at work here?