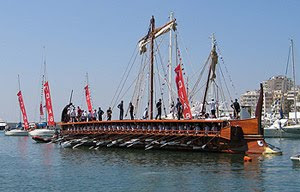 Here more on the Greek trireme. Most specifically, the ability of the oarsmen to propel those Greek warships as they were able to do so. IN A MANNER SUPERIOR TO WHAT A MODERN CAN DO ONLY WITH THE GREATEST EFFORT!!

"Fitness Has Fallen Since The Days Of Ancient Greece"

"We may not be as fit as the people of ancient Athens, despite all that modern diet and training can provide"

"the rowers of ancient Athens – around 500BC – would had to have been highly elite athletes, even by modern day standards."

Persons of that period - - ancient Greece - - and even into relatively modern times - - WERE TWICE AS STRONG POUND FOR POUND AS A MODERN INDIVIDUAL LIVING IN THE YEAR 2009!!

That this is so [the greater strength] is intuitive? People of that bygone era had to everything more or less in a manual manner, a manner usually requiring physical strength. These people led what is called a hardscrabble existence requiring just plain ordinary physical labor of a strenuous kind.

And there was a Darwinian selection process at work here too? Very few babies grew to adulthood! Of every dozen babies born, only about two would grow to become adults. Those persons surviving until age twenty-one were just of more stronger physiology and had an innate physical robustness about them?

I make the assertion that a person of the period [ancient Greece] would be pound for pound TWICE as strong as a modern! I base this upon empirical data from a surprising source. Re-creations of old time American farm settlements usually include an ice house. A structure having a double outer wall the gap between the two walls filled with sawdust. Ice "mined" from a pond in winter and placed in the ice house remaining frozen and intact for an entire summer, regardless of temperature. IT IS KNOWN FOR A FACT THAT FARMERS FROM OVER A HUNDRED YEARS AGO COULD MANHANDLE WITHOUT PROBLEM ONE HUNDRED FIFTY [150] POUND BLOCKS OF ICE , contrasting markedly with modern folks who can at best handle only seventy to eighty [80] pound blocks of ice in the same manner.

I would think that only among the American Amish people would you find TODAY folks that have the strength to perform as would an oarsman aboard and ancient Greek trireme?

Research, physiological readings, taken on those rowers, English oarsmen, university "crew" who are trained and very fit athletes, experienced and accomplished oarsmen in their own right. Even such persons found it hard to duplicate the feats of the ancients?

Those ancient Greek oarsmen, manning a trireme, too, had "equipment" that could be used to advantage? "Gear" consisting of leather cushions?

"Trireme oarsmen used leather cushions to slide over the seats, which allowed them to use their leg strength as a modern oarsman does with a sliding seat."

The ancients in many instance were able to "accomplish" what today a modern human can "do" only with the greatest of difficulty?