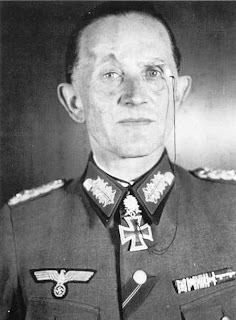 “I have no intention whatsoever of doing so….”

Here is Von Saucken. Senior German military commander at the very end of World War Two [WW2]. A man, much like Zeitzler, NOT cowed, intimidated, brow-beaten by Hitler. A man who spoke his mind while others cringed and cowered in fear. And a WEARER OF THE MONOCLE!

Von Saucken, complete with monocle, in conversation with Hitler:

"a meeting between Hitler and von Sauken in the Chancellory in March 1945 . . . von Sauken saluted and gave a slight bow"

"Hitler then told the General . . . he would have to accept the authority of Gauleiter Forster. Von Sauken stiffened and, still with eyeglass in place struck the marble table with the flat of his hand and said: 'I have no intention, Herr Hitler, of placing myself under the orders of a Gauleiter!' . . . It seems to me that Hitler shrank physically from the General’s words. His face looked even more waxen, his body more bowed than ever…."

"Hitler, who seemed at last to have met his match in the matter of gazes, finally said in a weak voice: 'All right, Sauken, keep the command to yourself.' After a few more minutes of discussion von Sauken left ‘with the merest hint of a bow’. Hitler did not shake his hand."

Von Saucken was the type of man that was feared and detested by Hitler - - but needed! Hitler was not an aristocrat, a man of poise, learning, ability, noble lineage, etc. Everything von Saucken was, Hitler was NOT! When in the presence of persons who were not the proverbial lick-spittle fawning toadies, Hitler was not the dominating personality as he is so often portrayed? When he met his match, the man [Hitler] would and did back down!

I read a book recently comparing Hitler and Stalin, and it made a couple of references to people who met him in his office in the 1930s referring to his effeminate manner. One reported that Nazi staffers explained ahead of the meeting that Hitler wasn't as impressive in person, that his true amazingness was only visible when he was orating.

It seems like the Nazi party had been built in the early 1920s out of the fringe elements in German society: homosexuals like Roehm, Oujia board enthusiasts like Hess, and bohemian painters like Hitler.