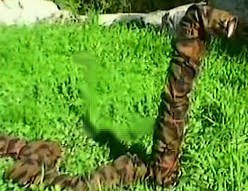 From the Jerusalem Post through Robert, an interesting application of military robotics. Being fielded right now, as we speak?

"A robot snake, capable of recording video and sound on the battlefield, is on the way to join the the IDF's hi-tech arsenal."

"[a] spying robot, which is about two meters long and covered in military camouflage, mimics the movements and appearance of real snakes, slithering around through caves, tunnels, cracks and buildings, while at the same time sending images and sound back to a soldier who controls the device through a laptop computer."

"The Defense Ministry, with experts from the Technion-Israel Institute of Technology, based their intelligence-gathering robot on a previous project of Ben-Gurion University, which created a slew of robotic animals with special abilities"

A SLEW of robotic animals. A SLEW. Cat, dog, etc. Mimicry of animals that are to have military applications. Robotics for military purposes is all the rage now. And the technologically advanced and innovative Israeli is as usual at the top of the heap or close to it. The Technion is thought to be at least the equal of MIT in producing first-rate engineering and scientific brain power, perhaps superior in some respects. Israel is a small nation with a lot of can-do!

Decades ago now there was a Sci-Fi television program ["The Outer Limits" Soldier (1964)] about the ultimate soldier. Starring Michael Ansara [Quarlo]. The military unit commander was A CAT that had been given a brain of a human or something like that! We are not that far behind now!