Thanks to the web site Luft46.

There was a ferment of aircraft design in Germany during WW2. As necessitated by the needs of the Luftwaffe, all sorts of odd and unusual experimental aircraft were on the drawing boards, existed in the minds of the aeronautical engineers, or were built as demonstrational concepts!

To include a variety of Vertical Takeoff and Landing [VTOL] aircraft. Such as:

This VTOL (Vertical Takeoff and Landing) aircraft project's design, by Weserflug, dates from 1938. A TILT-ROTOR aircraft far ahead of it's time.

"Although this was a very novel idea for an aircraft at this time, the concept never left the drawing board. A very similar design was later built by the United States as the Boeing V-22 Osprey, and began testing in 1989. Even today, the tilt-rotor concept is proving troublesome"

The Osprey has done a deployment to Iraq and came back with flying colors? There has been so much controversy regarding the entire concept and now battlefield usage of this tilt-rotor aircraft! it all went well in Iraq? If it had not, you would have heard about it a long time ago? 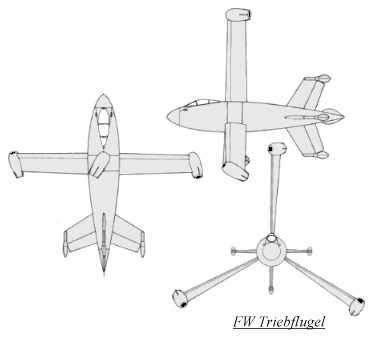 "This Focke-Wulf VTOL (Vertical Take Off and Landing) fighter/interceptor was designed in September 1944. The three untapered wings rotated around the fuselage and had a gradually decreasing pitch towards the wingtips, thus acting like a giant propeller. At the end of each wing was a Pabst ramjet"

This would have had to be seen to be believed. The THREE WINGS ROTATED AROUND THE FUSELAGE, EACH WING POWERED BY A RAMJET MOUNTED ON THE WING-TIP! An aircraft best described as a "tail sitter"! "It would take off and land sitting on its tail, flying horizontally like a conventional aircraft."

Again, we have the case of the Triebflugel resembling the post-WW2 American Pogo, or is it the other way around?

Both the tilt-rotor and "tail sitter" concepts were too far ahead of their time and just so unpractical that they never got off the drawing board?

A ferment of German aircraft design without results that were meaningful? Concepts, especially the Triebflugel, that were so ahead of their time or so impractical that the effort of man-hours and developmental resources was poorly spent? The reader must decide for themselves!